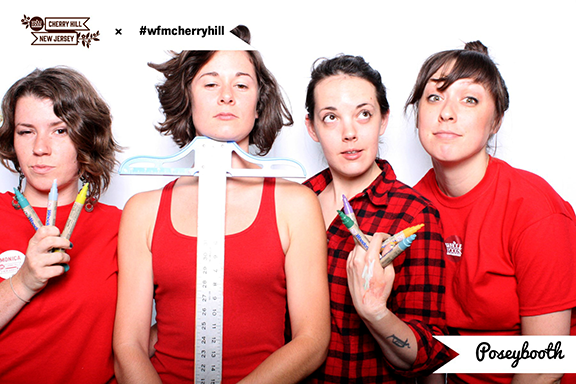 By Monica Kelly
In Uncategorized

Allow me to introduce the new and unstoppable Chalk Army!
From the left… Myself, Kelly Franklin, Carol Paist, and Liz McErlean. Not pictured but definitely legendary, Tegan Belitta is the chalk artist who originally trained me as her assistant at Whole Foods Market North Wales, PA.
I then was hired as Store Artist at WFM Jenkintown, and helped open WFM Plymouth Meeting. Eventually I moved here to New Orleans as Store Artist of WFM Arabella Station. After a year at Arabella, I parted ways with the company to open Monica Kelly Studio in 2012.

I’m so lucky to have been invited back up North to join forces with my home team once again, for the opening of WFM Cherry Hill!
Chalk Army is the name we’ve coined to describe this bigger & badder collaborative of chalk artists, now specializing in store openings. We worked for 10 days straight creating all of the hand-lettered and illustrated signage for the new grocery store. It was such a valuable experience — Not only did I get to reunite with these ever-evolving artistas, but we exchanged countless ideas, tips & tricks during our time together.

Next stop for Chalk Army is WFM Columbia, MD in August!